I am feeling my way into a new world. Gently nudging the edges so they grow, unfolding like petals. First, my house begins to feel like home. I find myself settling down for the evening,like my cats, rather than roaming round restlessly. I begin to potter in the garden, someone else’s garden true, but huge and in desparate need of care and attention. I pull out brambles, prune back unruly bushes, we cut the beech hedge in the front of the house and in doing so begin to feel a pride.
My tendrils reach to new experiences: popping to new neighbours for a cuppa, bearing a slice of cake. I am proud of the cake too; my first from the Aga!
Life has the texture of a holiday.
Visiting new villages, new towns most days. Walks, markets, new shops, even supermarkets tempt me to difference, to change habits of a lifetime.
How many times have you walked the isles of your local supermarket, cursing that they have changed the shelving layout? It takes longer to shop, but you see more. We are trying lots of new shops, market stalls for fresh vegetables, the Sherborne Pannier Market for fresh fish and bread, supermarkets in several different towns.

Today, as I was driving back from a perfectly normal supermarket experience, I looked… Really looked! Rolling hills, a soaring buzzard, wide skies, a patchwork of creams, browns blending together over the farmland, describing the stages of harvest in their hues.
Pull in, stop and wonder a while!
Really! This is special! It’s beautiful and I live here!

The whales and dolphins this morning were breathtaking. In a way I feel full of adrenalin and need some exercise. We loved out three hour walk yesterday so choose to go as high as we can to get a good view of the area. We drive some way out of Kaikoura until the road peters out and becomes gravel. Over a ford we splash, having inspected its depth first!

We begin the steepest track, bravely, on foot. It sweeps up the lower hills at quite a pace. The weather has become much warmer now and I strip several layers of jumpers off as we go. Very soon there is a fantastic view below us, of the river valley. Exhausted, hot and happy we attempt the one handed photo of the two of us, trying to include the view.

We are not actually happy with any of the results but…

We choose to return to the van restaurant by the beach for dinner. John has salmon and I have half a crayfish. It makes me realize just how huge Herbert had been when we ate him in Doubtful Sound. But this one is very tasty too!

It’s been a wonderful day! The return of the sun, the wonderful Sperm Whales, the hundreds of dolphin and an excellent walk followed by the fish supper.
It’s good to be alive!

We’ve just booked a flight to Perth in about one week. I just wondered if there’s was anyone out there who could tell me what they advise us to see and do. I don’t know the area at all.

We thought of hiring a camper van, maybe a mobile home?

Not sure whether to go north of south from Perth?

We only have a one way ticket so far and must be back in Sydney by mid April. Might stay in WA for about two to three weeks. Is this a good length of time?

Please comment and help me decide what to do next.

The Banks Peninsular has a strong French influence. To me, it feels like a mock Fiordland, in miniature. The hills fold down in fingers and troughs from the centre towards the coast. At times, the land reminds me of stiff material folds. Pausing at a lake we find Pukeko and black swans battling the waves.

SH 75 from Christchurch to Akaroa merely hints at the beauty that is to come. Akaroa itself has some nice shops and good restaurants. We each fish at Ma Maison overlooking the sea. The food is good and the experience of eating lovely food in good surroundings is one I savour.

Wandering around the shops we find a toy Pukeko, who reminds me of the story book we bought our grandson, so I buy the toy to go with it. Then we find a green t-shirt with “Sweet as BRO”: John and I laugh because when we first heard someone say that, John thought it was “Sweet airs…” and attributed it to Shakespeare.

Simply the most stunning scenery ever. It reminded me of a Lakeland artist, which John’s mum loved, Heaton-Cooper. Despite the grey weather, the sea regained its fantastic blue with the slightest of sun and the clouds added a purple over this. 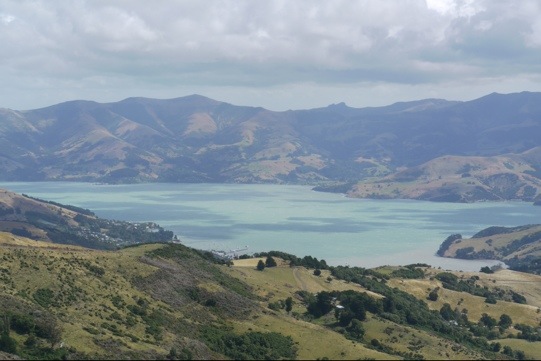 The road rose and fell over each finger of land. We explored bays and stopped at will because there were so few cars about. Most often when we stopped we climbed out the car to drink in the view. But at times we felt we might get blown away, by the strength of the wind. Once John struggled to close his car door as the wind was behind it. Another time the car was rocked so violently, we decided not to venture out!

You can well understand what this artist might paint! We loved this sculpture found in Akaroa.

We are taking the scenic route to Christchurch, inland, via Twizle. It adds several hours to our journey, but, proves worth the effort.

The first big feature is a series of dams between lakes Waitaki and Aviemore. These were some of the first dams made for New Zealand and date from 1930, when the government clearly had a massive man power scheme up and running to deal with the latent unemployment and global depression. Most of the hard core earth moving was achieved by pick and shovel. Incredible achievement! The turbines they used were huge too, and examples litter the lay-bys.

At Omarama we stop at the Wriggley Ram for coffee, where you can pay to watch sheep being sheared.
We drove on to Twizle and the colour of the lakes was outstanding.

Seriously, no photoshop enhancement needed! I don’t have the software for that sort of thing while I am traveling!
We learn that a fine powder is held in suspension in facial melt water. This helps the light refract off the water, giving it that amazing blue. It’s the same principle as finest dust floating in our atmosphere, refracting light to make a blue sky.

We had imagined Burke’s Pass might be winding, torturous and steep, but it’s a lovely drive. The area is used for skiing in inter and John and I, who have never skied, feel it would be a good place to start.

By Geraldine, we think we must be returning to civilization. We near the coast again and the lorries become more frequent and gradually the traffic builds up.
By Christchurch, there are traffic lights, road works, roundabouts and traffic.
Of course, it’s sad to see whole sections cleared for rebuilding, but our first impression, driving through the city is how incredibly hard people have pulled together to withstand a duel earthquake on such a massive scale, plus hundreds of aftershocks.
The city centre is closed but the sprit of the city lives on.

I was browsing through my album of photos on the IPad, remembering beautiful Doubtful Sound and I realized I’d forgotten the seal colony. Too good an opportunity to miss. Here is a round up of photos to remember AND the seals – fur seals, quite small and very agile!
Enjoy! 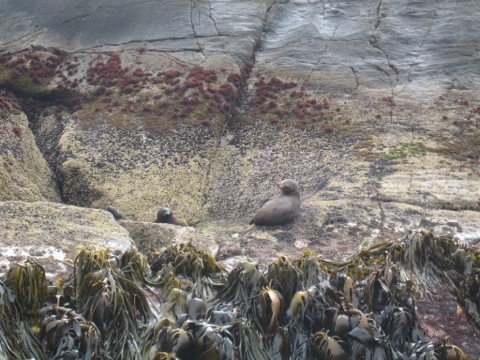 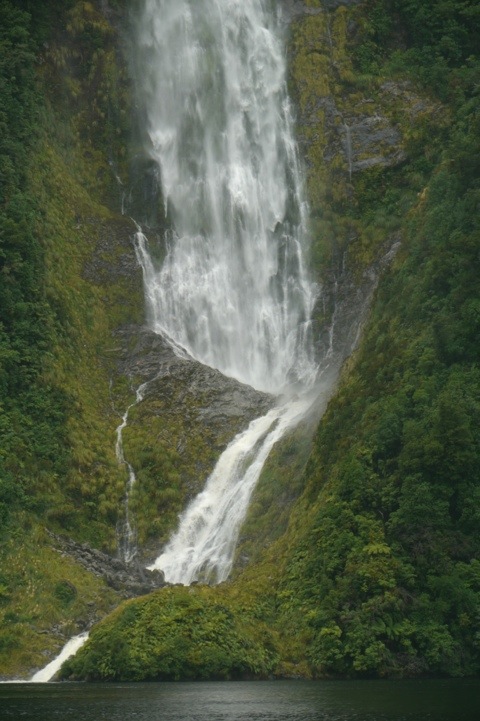 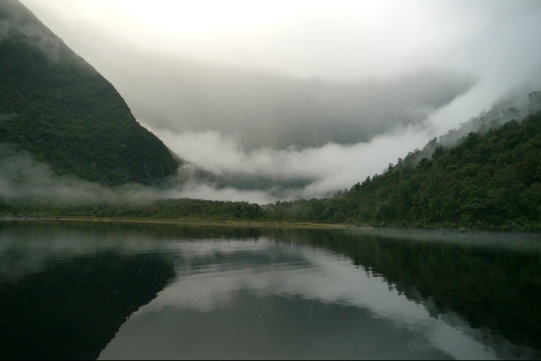