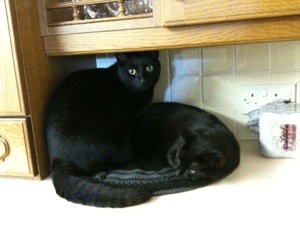 Bob mewed every 6 seconds for the first hour in the car. He panted and climbed mercilessly over his sister, sitting on her, aware only of his own distress. Gizmo sat in silence for the most part hoping it would all go away soon!
On arrival they were locked in the downstairs cloakroom while the removal men unloaded our home. Eventually the cats graduated to the run of the kitchen, where Bob explored every cupboard and Gizmo grabbed some well earned sleep.
Gradually Bob seemed to settle but unusually he chose to sleep tucked closely next to Gizmo!
By day three Bob was scratching in his litter tray every few minutes. The litter tray remained dry. Bob was in trouble.
We made enquiries of our lovely new neighbours and took him to a wonderful vet in Puddletown. The name seemed very appropriate!
David showed great care, explained that distressed cats cannot produce the hormone which protects the bladder from urine, thus causing cystitis. He gave Bob an injection, which he hardly noticed, prescribed some pills, looked Giz over and pronounced her fine. In contrast to vets I have visited in London, David took his time, gave me loads of information and had a great way of relaxing both cats.
Within a few days Bob was clearly better and back to his confident self.
Gizmo assures me that this is a better kitchen than the one in London because there is more space, an indoor toilet and an Aga.
Bob is busy persuading me he is ready to face the big outdoors. We will see, Bob!

I couldn’t believe we had just inherited a cat and that his last owner had three others,but simply did not care enough about him to encourage him to stay.  So I returned to my neighbour’s house several times to check they really meant it. They never changed their minds, but they told me more of his history.

Mr had been born in their house of two equally large and hairy parents.  Initially, he had been a playful, affectionate cat, but as the family grew, and he experienced several changes he became withdrawn, even aggressive. (Oh good!)

The family have moved about a lot.  Firstly to Northumberland, where Mr was involved in a car accident, resulting in a chipped canine tooth and damage to his claw.  This claw got so bad, it was eventually amputated.  The family then moved to Spain, taking Mr (aka Simba) with them.  He found country life did not suit him because the local farmer shot at him, thankfully missing.  I guess the idea was to scare him away for some reason.

He then came back to England where the family had the new baby and invested in another kitten, who seriously challenged Mr Simba within the house.  So Mr decided to move into the garden, returning to his house for food every third day or so.  All the neighbours knew him because he also tried his luck in their kitchens, requesting food and menacing their cats. He was frequently chased away.  We think he lived a hobo’s life for nearly one year. 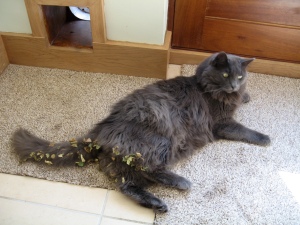 Why he chose to move in with us and the new kittens; who knows.  Perhaps he thought he could gain dominance whilst they were still so young.  Perhaps he knew he was onto a good thing.

Mostly, he slept and ate.  Sometimes he disappeared for a day, but never longer than 24 hours.  He learned to play with the kittens.  His huge bulky frame gambling down the garden like an elephant, tumbling headlong into a kitten, who was bowled over in the rush.  The kittens thought it normal!

He joined in with them when there was a string to chase.  As he weighed over 8kg, he crashed through the undergrowth, somersaulting onto the string and grasping the tiny thing tightly in his massive claws.  Just for comparison a full grown domestic short hair cat should weigh 5-7 kg.

When he was poorly he was a great hypochondriac.  Many was the time we took him down to the vet, only to be told there was nothing wrong with him.  So when recently he took himself down the garden and sat in the rain, refusing food, we knew he was ill. The only other time he had been truly ill, it had been a urinary infection and £500 vet fee, nearly a year ago. My daughter was house sitting.  Her only task (apart from looking after her own family etc) was look after the cats.  She took him over the road to the vets.

Bladder the size of a football.  Hospitalisation.  But all failed as within two days of our arriving back from our travels, I just knew he was still really ill.  The vet said we could try drugs for a few months and more hospitalisation, but there was more than a chance it would not work.

So this is my salute to Mr.  The cat who decided for himself.  Despite the fact that every time you touched him, drifts of fur flew through the air; that he dropped twigs and dirt over the carpet when he scratched or shook himself; that he continued to hassle local residents by wandering into their kitchens, he had many outstanding features.

He welcomed you by sitting at the front gate, rolling in dirt baths to bring in more mess. He showed us that he loved us by learning to play.  John loved him, and he does not like cats much.  He was incredibly laid back with us,  very easy going.  And now he is gone. 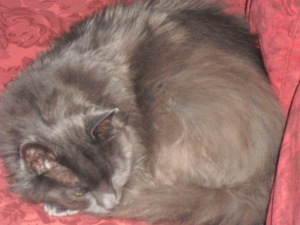 The first time I met him, he was sitting by my windowsill, staring out into my garden.  He seemed quite confident for one who had not been invited in. It’s in my nature to think the best of everyone, so I gave him the benefit of the doubt, and thought he must have just lost his way – ending up in my house.  With no great ceremony, I picked him up and took him back to the garden.

Then I looked at our two cats.  Why had they not noticed this intruder?

They were both about 18 years old.  One of them blind and deaf, the other still able to work out when it was tea time, but neither had felt up to challenging this enormous grey cat.

We did  not see him again for ages.  Not until the aged pair were in their last weeks.  Then suddenly he turned up regularly, snatching their uneaten food and departing at leisure unless he was spotted.

When my two tabbies had given their all, and passed on, I was momentarily uncertain what to do with their remaining catfood.  That’s  how it all started, I guess.

Soon we found him sitting by our pond, watching the fish, on a regular basis.  Like a fool, he seemed the perfect solution to the leftover food.  He never stayed for long, rarely wanted to come in, now the old cats had gone, but always brought with him a few twigs or leaves woven into his coat.

I took to brushing him and he soon became glossy but the matted quality of his fur, meant several arguments between the two of us as to how long he was prepared to put up with a grooming session.  At times he would lie on his back and kick hard with his back feet:  then you had to beware, or carry his badge of a long scratch along an arm!

Sometimes he wanted to sit on an armchair, but only if we left the door to the garden open.  As soon as it closed he stood up and demanded an exit.  For weeks on end he failed to turn up at all.  I missed my old cats; the house seemed empty without them, but this massive grey cat neither belonged nor settled with us.

“It’s no good,” I said, “I want more cats.”  I phoned round and found two kittens, brought them home straight away, even though we had builders in and it was hardly the best time for little kittens.

Just as soon as the kittens came home, the big grey turned up again. More determined this time, confident to prowl through the house, stay for longer.  The cat with no name was so dignified, so aloof that we began to call him ‘Mr’: short, of course, for Mr Cat. “This is crazy,” I moaned to John, “I didn’t want three cats.  He must belong to someone…”

So we made notices, asked around.  Everyone seemed to know who I was talking about.  He’d been seen in lots of people’s gardens, but no one knew where he came from.  An idea struck:  maybe he had a mircochip. Just over the road is a vet who could check.

Sure enough, the chip revealed he lived just around the corner from us.  We knocked; no answer.  We tried the next day and the next, until after a week, I despaired.

His name was Simba, he lived with three other cats and a baby of about 2 years (and a couple with an 11 year old)  He did not like the baby, who rode him like a horse.  He did not like the third cat who had joined the family in the past year.  I could have him if I liked.

Outraged, I came home.  I could have him if I liked?  Didn’t they care? That’s how Mr joined our family.  Clearly he felt at home when other cats were around.  I wish you could have seen him when he first realised we had the kittens.  One was asleep in John’s lap and Mr came in, barging in to sit in prime position, he simply didn’t notice the little ball of fur, until he sniffed and sniffed and nosed the kitten into movement.  The ensuing hiss was incredibly alarming, although no fur was ruffled, our nerves were!

Mr made friends with the builders, all of whom greeted him each morning.  After the hissing incident, and knowing his sudden rage, if we so much as stroked him the wrong way, we decided to separate him from the kittens initially.  Mr still disappeared for a day at a time, but now always turned up for tea!

So that was it!  Three cats!