I gave up learning geography at the age of 12 or 13. I remember learning about stalactites and stalagmites because I was taught that tights fall down and mites grow up! Both are found in caves. How dreadful that I also remember most of my friends chose geography over history because they wanted to go on the field trips.

John has taught me plate tectonics and the effect of erosion but my knowledge of places has always been sketchy.

I thought the Amazon and the Nile sounded impossibly distant, romantic and unattainable. When we were wealthy enough we visited each, swimming in each river was pure joy and unforgettable.

The other ‘out of this world location’ in the same impossible-I-should-ever-get-there category was the Great Barrier Reef.

Today we spent all day there, snorkeling in three different areas of the Opal Reef.

Now, John and I have travelled a lot and we have snorkeled before, in Egypt, for example and in Greece. Both wonderful, but our understanding is that lots of day trips of this nature promise a unique time but all the different companies end up in the same spot and the water becomes infested with people competing for the best locations!

We chose ‘Wavelength’ out of a dozen or so trips on offer because they specialize in snorkeling and do not do dives. They limit their passengers to 30 and even better they have a marine biologist on board.

It is very smoothly operated: as soon as you board, Lycra sting suits are issued, flippers, goggles and snorkels all come out. All in very Our first stop is “beautiful”, the fish are wonderful. They swim in shoals, or pairs over the coral reef, rich in , diverse in shape. No other boat joins us. We are free to swim for one hour, wandering at will over the incredible landscape that is revealed below. Although I have taken photos in a cheap underwater camera the images will not be digital and are not developed yet so I cannot share the visual impact with you. I will try to paint the picture in words and borrowed photos

Next, ‘Ray’. This time the marine biologist took us in groups. She dived to bring up sea cucumbers, coral branchlets, a coral mushroom and talked us through each before carefully replacing them. Of course there are things she cannot disturb, then she dived below us to point before coming up to explain the tactics for survival each element of life uses.

It is really hard for 15 people to ‘gather round’ in the water. We don’t always have control of our movements. Our speed and direction vary and we often bump into each other. Nevertheless, the information was very interesting. Imagine the mushroom coral, open both sides like the gills of a Portobello mushroom. It exudes a clear sticky gel as a sun block! Sea cucumbers do exactly the same. The colour of the coral depends on a symbiotic relationship between the animal and plant which make us the coral reef.

Our final swim was rated by Australia’s National Geographic as the best snorkel location in the world. By now we were close to the edge of the barrier, near the open sea and the force of the waves was stronger. The variety of coral, fish, colour texture was incredible. From lace plates built into huge towers, to brain coral coiling over itself. It is incredible to see this variety, impossible to describe. My favorite part was seeing an anemone of white tendrils, inside which was Nemo, or his relation. T my horror the Clown Fish are now endangered! Following Disney’s film, people came to poach them. S now they are quite rare. Isn’t that dreadful? Nt the message of the film as I recall it! Luckily the one I saw had a baby. So all isn’t lost. Our guide said she visited it every day just to make sure it was safe. Ahh! 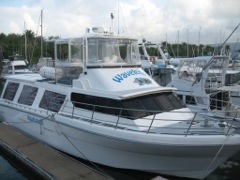